Pro Watercross Mission Statement: our mission as a sanctioning body is to be a global leader in improving the quality of the watersports while adhering to a commitment to integrity, innovation and excellence… that we have become known for. We continue to establish an environment for competitive watersport competitions for watercross, hydroflight and stand-up paddleboard enthusiast to come together and compete while teaching the importance of responsible use of their equipment and safety on all waterways. 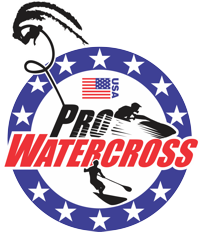 2015: UWP formed Pro Watercross membership to give a voice to event organizers, competitors, crew members and PWC enthusiasts. Through this we are developing a skilled group of individuals to establish event safety procedure, competition rules, uniform class structure, standardized scoring & technical procedures in order to grow the sport.

The 2015 Pro Watercross’ World Championship event and CBS coverage caught the attention of the HydroFlight community and ultimately Flyboard inventor and former IJSBA world champion Franky Zapata. Zapata was intrigued by Pro Watercross working to bring a HydroFlight World Championship to the USA in 2016 and quickly jumped on board as the title sponsor for this first-time world event.

With its new membership base Pro Watercross established a World Championship in Naples, Florida bringing the world’s best watercross racers together as well as the event televised on CBS Sports. The nationally televised CBS Sports Spectacular show brought watercross to the world for the first time in over 15 years.

2014: UWP rebranded the name of the tour as the Pro Watercross Tour.

2000: UWP was one of the first promoters to be awarded a national tour stop on the IJSBA National Tour which for a short time became the American Power Boat Association (APBA) National Tour in agreement with the IJSBA.

1998: In 1998 UWP given world qualifying races for the northeastern (Region 8) of the USA in order for competitors to qualify for the International Jet Sport Boating Association's (IJSBA) World Finals.

1995: The Pro Watercross Tour is the leading personal watercraft racing series in the United States of America and consists of an elite group of both professional and amateur athletes competing at its events throughout the summer. UWP event producer of the Pro Watercross Tour was founded in 1995 as a regional race circuit in Upstate New York with core values in mind to provide a safe racing atmosphere for its competitors in a family friendly environment.